Father Charles of Mount Argus, the Saint of Healing and Hope

Tours at Mount Argus on Saturday 19th May at 3pm & Sunday 20th May at 2:30pm.  In this 125th anniversary year of his death, visit the church of the healer-saint of whose funeral it was said: “Even from a point of numbers, the great Parnell’s funeral was inferior to that of the simple holy old Fr Charles.”

St. Charles of Mount Argus was born John Andrew Houben on 11th December 1821 in the village of Munstergeleen, Holland.  In 1841, he enrolled for military service and while in the army, he heard of the Passionists and decided to join them.  With his military service completed in 1845, Andrew joined the Passionists at Ere, in Belgium, and was ordained in 1850. He took the name Fr. Charles on his profession. In 1852 he was sent to England and he never saw his homeland Holland again. Here Fr. Charles first came in contact with the Irish who were emigrating to England in great numbers in the wake of the Famine. He was transferred to Ireland and on 9th July 1857, he arrived in the newly-founded monastery of Mount Argus, in Harold’s Cross. The very first Mass had been celebrated at Mount Argus less than a year earlier on 15th August 1856. 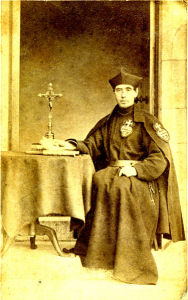 Charles age 36 on his arrival at Mount Argus

Dublin had a population of less than a quarter of a million people then. Many of them were British soldiers. It was not a saintly place, with many official brothels, licensed public houses and shebeens. Murders were common and moral standards questionable. Charles was not a good preacher, having never really mastered the language. But he excelled in comforting the sick. He was fond of the Irish, and called them “my people”. He respected their struggle against oppression, and admired the way the Faith was preserved, though he wasn’t blind to their faults. Fr. Charles was a cheerful member of his community, and could often be heard humming the Dutch national anthem as he walked around the monastery. He soon became extraordinarily popular not only in Dublin but all over Ireland and collected money throughout the length and breadth of the country to pay for the new monastery of Mount Argus, which was built and opened in 1863, six years after Fr Charles’ arrival.

It was his gift of healing the sick for which Fr Charles is most clearly remembered. It became a daily routine for him to walk from the monastery to the Church preaching to the kneeling people about the love Jesus showed in his passion. Inside the church he would pray privately, ask the people to renew their baptismal promises, bless them with the relic of St. Paul of the Cross, and then move among them laying his hands on them in prayer. Great graces were attributed to his prayers – not only physical cures but also healing of depressions and psychological disorders. Often people would send carriages to bring him out through the city and into the country to visit the sick. As many as 300 people a day flocked to Mount Argus to be blessed by him. Fr. Sebastian Keens told of a boy of 12 years old who lost the use of his leg and was brought to him. With no delay he called Fr. Charles and shortly afterwards found the boy walking up and down in front of the house completely cured.  His fame spread and trouble came. Some medical doctors claimed, a claim which later they withdrew, that he discouraged people from going to the doctor. Then others took Holy Water blessed by Fr. Charles and, without his knowledge, began to sell it throughout Ireland. Although this was not Fr. Charles’ fault in order to discourage the practice he was transferred to England in 1866 and remained there for eight years.

Fr. Charles returned to Ireland on 10th January 1874. Charles was once more among “his people” in Mount Argus. He remained there for the last 19 years of his life. The daily pilgrimage of sick and distressed began almost immediately on his return and the cures began again. John Patterson, 6 years of age and blinded by flying stones was blessed by Fr. Charles. The first thing he saw was Fr. Charles with his arms outstretched and on the way home he saw a cow in the field. 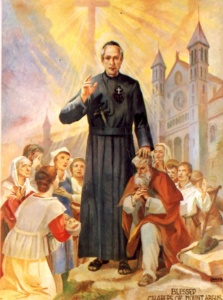 Fr Charles went out all over Dublin and into the country blessing people. He started on his fund-raising rounds again, but this time for the new Church at Mount Argus. A new and bigger church was planned and built to cope with the large numbers of people coming to Mount Argus. It was opened and dedicated as the Church of St. Paul of the Cross in 1878. The old church continued to be used, especially by Fr. Charles for his special ministry of blessing and healing, until his death in 1893. He would climb up and down the 58 stone steps that linked his monastic cell on the top floor of the monastery with the ground floor numerous times each day to greet his many visitors. It was an increasingly arduous undertaking for him, particularly as in 1881 he had been involved in an accident. A trap in which he was travelling overturned near St Clare’s Convent at Harold’s Cross Park, causing a leg fracture which had never set right.

During the last years of his life, Fr. Charles endured many trials. His family in Holland were dying and the old injuries from his 1881 cab accident (which included a wound which became ulcerated) returned to plague him. He also had constant toothache. He didn’t complain, but people saw his swollen jaw and his hand going up to his mouth. Towards the end of 1892, it was obvious that the life of Fr. Charles was coming to an end. He said his last Mass on the Feast of the Immaculate Conception 8th December 1892. Word of his illness spread through the city, and crowds gathered to enquire about him. Just after Christmas he couldn’t eat and lost his sight and he passed away at 5.30am in the morning of 5th January 1893.

His body was brought to Mount Argus Church where it lay in state for five days. Despite heavy snow, thousands filed past his coffin with the police keeping order. His funeral was said to have been bigger than Parnell’s two years before. The Superior of the monastery wrote to his family: “The people have already declared him a saint.” Finally his remains were laid to rest in the cemetery beside Mount Argus Church. His grave became a place of pilgrimage where people came daily to pray.

Fr. Ignatius Waters, of Mount Argus produced this edited version of a letter written by Fr. Wilfred O’Hagan the day after St. Charles was buried at Mount Argus in 1893):

“Dear Ada, I received your letter too late to apply the medal to the remains of Fr. Charles but I am sending you something which hundreds of thousands in Ireland would give the world for: the (heart) sign which the old man had on his breast during the time he was lying in the church. I do not know whether it was the sign he wore while alive but I know it is the one he had while lying dead in the church. All along I considered Charles a saint but since his death I am sure of it. Such extraordinary crowds were never seen in Mount Argus. The people were from every corner of Ireland. The roads were blocked and it was absolutely impossible to get into the church without long waiting. Sunday evening was the wettest and most disagreeable here that I have seen for a long time. It was quite a Godsend that it was so, or else I am afraid some would have been smothered. Even as it was, the crowds were outside in the rain, still struggling to get in.

The cabmen must have made a fortune. I hardly suppose there is a cab in Dublin that was not at Mount Argus in the last five days. But the cabbies were bent on more than taking fares. Yesterday after he was buried, two cabbies were found at the grave with their horse’s nosebags filled with earth. Of course this cannot be allowed to go on; else we shall have to be making a new grave every day!

The day of the funeral was awful. The Rector wrote to the superintendant of the police for men to keep the crowds back. We had no horse police but rows of helmeted men were overwhelmed by the pressing crowds. Poor old Ireland! There is faith here yet. Even from a point of numbers, the great Parnell’s funeral was inferior to that of the simple holy old Fr. Charles.”

Fr. Ignatius allows that Fr. Wilfrid may have been given to some exaggeration with his mention of “hundreds of thousands” ready to give the world for Charles’ heart sign and the 200,000 who attended Parnell’s funeral on 11th October 1891 being inferior to the number who attended the funeral of Charles, but it does express his amazement at how well known and loved this simple, holy old man was and the magnitude of the crowds that attended his funeral.

In 1949 Fr. Charles’ remains were moved to a new tomb inside Mount Argus Church and his Shrine became the place of prayer. Miracle cures continued to be attributed to him. The legendary Irish guitarist, Philip Donnelly, ‘The Clontarf Cowboy’, who toured and recorded with stars such as Johnny Cash, Townes Van Zandt, Guy Clark, The Everly Brothers, John Prine, Emmylou Harris, and Nanci Griffith in the 1970s and 1980s, and whose song ‘Living In These Troubled Times’ was a Top 10 hit for Crystal Gayle, considers himself to be one of St Charles’ miracles. On a recent visit to Mount Argus, he told how as a two year old he was hospitalised in Harcourt Street Children’s Hospital, and his parents were told there was no hope for him. When Philip’s father pleaded with the medical team to do something, they said he needed a priest to counsel him to come to terms with the inevitable, and sent him to Mount Argus. There he was given a relic of St Charles and told to place it under the child’s pillow, which he did. When Philip’s father woke by his son’s bedside the following morning, Philip was up playing in bed and his doctors could not account for his remarkable recovery.

Fr. Charles was beatified by Pope John Paul II in 1988 and on 3rd June 2007, he was canonised by Pope Benedict XVI.  A new portrait by well-known artist James Hanley featured on a postage stamp to mark the occasion. A new song for St. Charles, “Come to me”, was written by Liam Lawton. Hundreds of pilgrims, including the then President of Ireland Mary McAleese, the then Lord Mayor of Dublin Vincent Jackson, and the Archbishop of Dublin Diarmuid Martin, travelled to Rome for the canonization, which R.T.E. televised live. A Thanksgiving Mass was held in Mount Argus hours after the canonisation with the church packed to the seams and over 1,000 more outside the church or in a marquee to where the mass was transmitted.

Mount Argus is the only church in Ireland to hold the body of a canonised saint. People are now coming in increasing numbers to Mount Argus twice each day to be blessed with the Relic of St. Charles. They regard St Charles as a saint for the poor, for the sick, for immigrants and for emigrants, a saint for everyone.  The Feast of Saint Charles of Mount Argus is celebrated each year on January 5. 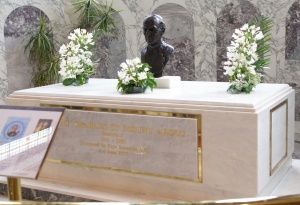 For further information on visiting the Shrine of St Charles at Mount Argus, refer to:

For information on the Pilgrim Path see here