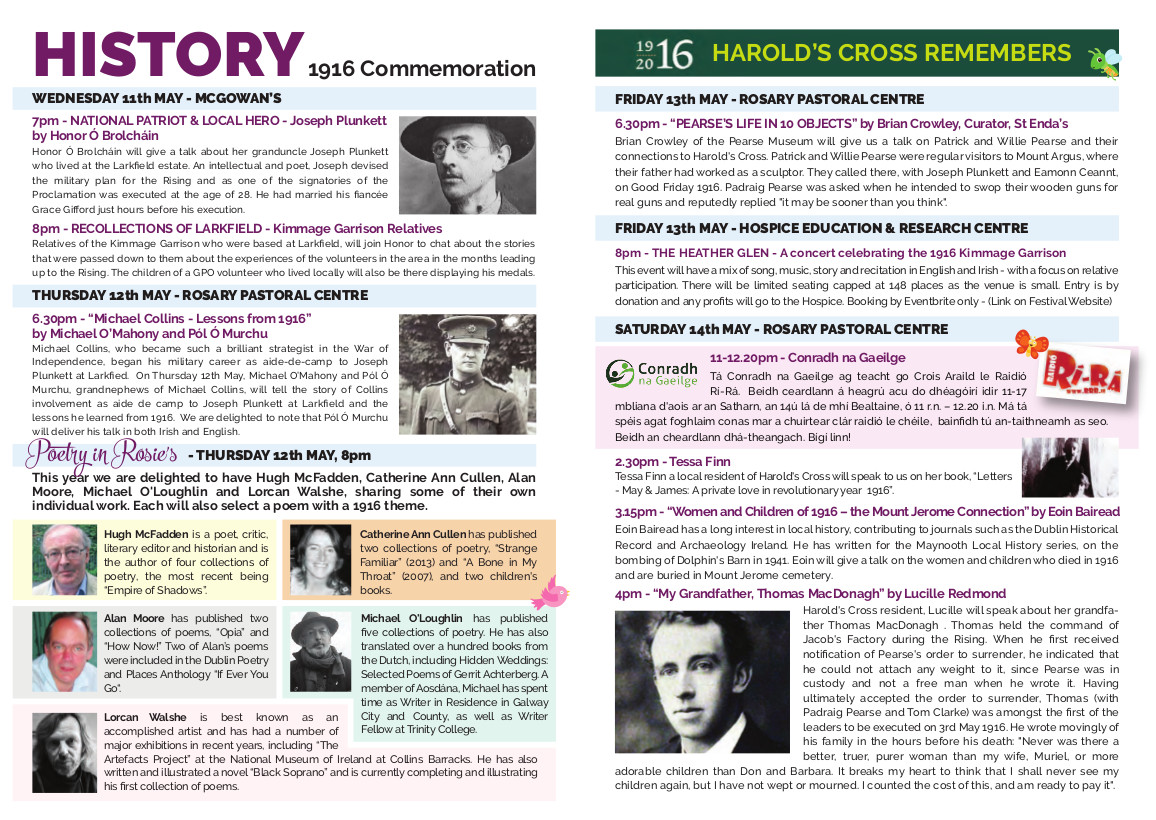 On Wednesday 11th May in McGowans, Honor Ó Brolcháin will give a talk about her granduncle Joseph Plunkett who lived at the Larkfield estate. An intellectual and poet, Joseph devised the military plan for the Rising and as one of the signatories of the Proclamation was executed at the age of 28. He had married his fiancee Grace Gifford just hours before his execution. Relatives of the Kimmage Garrison who were based at Larkfield  will join Honor to chat about the stories that were passed down to them about the experiences of the volunteers in the area in the months leading up to the Rising.

Michael Collins, who became such a brilliant strategist in the War of Independence, began his military career as aide-de-camp to Joseph Plunkett at Larkfield. On Thursday 12th May, Michael O’Mahony and Pól Ó Murchú, his grandnephews, will speak on Michael Collins’ involvement at Larkfield, and the important lessons he learned from 1916.

Patrick and Willie Pearse were regular visitors to Mount Argus, where their father had worked as a sculptor. They are reputed to have called there, with Joseph Plunkett and Eamonn Ceannt,on Good Friday 1916. Padraig Pearse was asked when he intended to swop their wooden guns for real guns and reputedly replied “it may be sooner than you think”. Brian  Crowley, curator of  the  Pearse  Museum, will  give  a  talk  on  Patrick and  Willie  Pearse and their connections to Harold’s Cross on Friday 13th May.

Harold’s Cross resident Lucille Redmond will speak about her grandfather Thomas MacDonagh on Saturday 14th May. Thomas held the command of Jacobs Factory during the Rising. When he first received notification of Pearse’s order to surrender, he indicated that he could not attach any weight to it, since Pearse was in custody and not a free man when he wrote it. Having ultimately accepted the order to surrender, Thomas ( with Padraig Pearse and Tom Clarke) was amongst the first of the leaders to be executed on 3rd May 2016. He wrote movingly of his family in the hours before his death: “Never was there a better, truer, purer woman than my wife, Muriel, or more adorable children than Don and Barbara. It breaks my heart to think that I shall never see my children again, but I have not wept or mourned. I counted the cost of this, and am ready to pay it”.