Lucille Redmond is an award-winning Irish writer (Hennessy, Irish Academy of Letters) whose stories have been published in Irish national newspapers, international literary magazines and anthologised in English, German and Italian.  Her contribution to an Irishwoman’s Diary in the Irish Times on 9 April, 2012 can be found here.  This is a wonderful example of her evocative style. 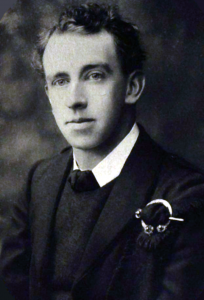 family played a hugely influential role in the Easter Rising and the struggle for independence, and we are delighted that she will share that family history with us in her talk on “My grandfather, Thomas Mac Donagh”.

Thomas was one of 6 children, born in Cloughjordan, Co. Tipperary. Both his parents were school teachers and he grew up in a loving home filled with music, poetry and literature. After attending Rockwell College, he also became a teacher and subsequently a lecturer in English at UCD. By all  accounts, he was an inspiring teacher. He was cultured and charming, and extremely popular. He published several collections of poetry and was also a playwright. He became assistant headmaster at Patrick Pearse’s Scoil Eanna in Oakley Road, and moved with him to St Enda’s in Rathfarnham.

In 1911 Thomas married Muriel Gifford, and they had two children Don and Barbara. In 1913, Thomas joined the Irish Volunteers and he was chief organiser of O’Donovan Rossa’s funeral in 1915, where Pearse’s oration made a significant impact. He joined the Military Council only weeks before the Easter Rising and was in command of the Jacob’s Biscuit factory (now DIT, Aungier Street). Lucille’s granduncles (Joe and Jack) fought alongside their brother there.  (John became a playwright and film director following the Rising. Joe became Deputy Minister for Labour to Constance Markiewicz. He was opposed to the Treaty and died on hunger strike on Christmas Day 1922).

While Thomas held command at Jacob’s, Muriel’s grandaunt Nellie Gifford (Muriel’s sister) was in the Royal College of Surgeons alongside Michael Mallin and Constance Markievicz. Another grandaunt, Muriel’s sister Grace, was engaged to Joseph Plunkett, and poignantly they married in Kilmainham Gaol just hours before his execution.

Thomas’ post held until 30 April when he received Pearse’s order to surrender. He was initially reluctant to accept it, particularly as Pearse was in custody, and felt his men could hold out for weeks. Ultimately he was persuaded to surrender, although it reduced him to tears. Thomas was court martialled on 2 May and sentenced to death, the death sentence to be carried out the following morning 3 May. He did not get to see his wife again before his death. He wrote movingly to his family in the hours before his execution:

“To my son Don. My darling little boy, remember me kindly. Take my hope and purpose with my deed. For your sake and for the sake of your beloved mother and sister I would wish to live long, but you will recognise the thing I have done, and see this as a consequence. I think Still I have done a great thing for Ireland, and, with the defeat of her army, won the first step of her freedom. God bless you, my son.

My darling daughter, Barbara, God bless you. I loved you more than ever a child has been loved.

My dearest love, Muriel, thank you a million times for all you have been to me. I have only one trouble in leaving life – leaving you so. …I kiss this paper that goes to you…”

Thomas’  sister, Sr Francesca, was permitted to visit him before his execution. On leaving him, she gave him her rosary beads. She recalled:

“Thomas kissed the beads and placed them around his neck. As I turned to ask the British Officer, who was standing by, if I could get the beads back, Thomas said quietly: “They will be shot to bits””.

The Capuchin priest Fr Aloysius returned the Rosary beads to Sr Francesca after the execution. Six beads were missing.